The working source code for this project can be found here.

In this post, we’re going to look at how to migrate an existing .NET Core app to MSBuild.

But first, the why?

Remember when we created a new .NET Core Console app and examined the contents what we found? That’s right, two files :

When we start to look at the roadmap of .NET Core, we will quickly see that MSBuild is replacing project.json. In fact if you create a new .NET Core app using the MSBuild template (available with the latest preview), you will see the following files :

The key takeaway here is that you may have .NET Core apps that use project.json that you might want to replace with msbuild.csproj in the future. This is what I intend to talk about today.

Before we begin, make sure you have the app found here if you want to follow along.

Go ahead and run through the installer and make sure you close the command prompt and open it back up if it was already open.

If that is what you have, then it is OK to move forward.

Taking a quick look at the commands

After installing the new bits, if you run dotnet help then you will see a couple of new commands. Here is a full list:

Tip: If you ever want to look at the commands in the source code, then check out this page.

You will see a couple of options, we are just going to navigate inside the proper directory and run the dotnet migrate command. It will output the following :

We see that the project succeeded and it created a backup folder which contains our .xproj and .json files.

So what do we have now in our directory?

If we type dir then we will see a new .csproj file as shown below :

Back to Visual Studio

If you try to open the project in Visual Studio 2015 then you will see the following error: 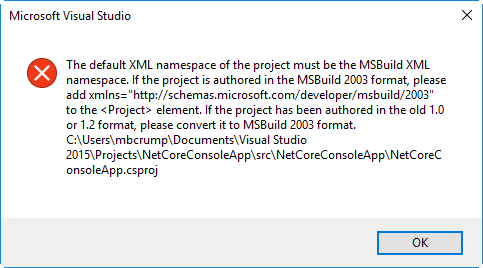 This cryptic error just means that VS 2015 is not supported. If you want to open this project then you will need to install the Visual Studio 2017 release candidate.

Once that is resolved you should be good to go!