The working source code for this project can be found here.

In this post, we’re going to look at how to create a test from .NET Core and run it through the command prompt and inside of Visual Studio.

Before we begin, make sure you have the app found here if you want to follow along.

If you go to File-> New Project (in Visual Studio) and look for .NET Core then you will see the following templates : 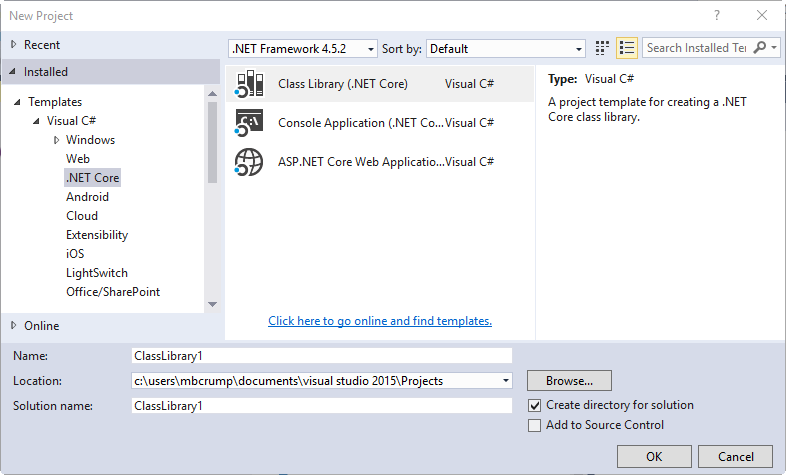 The only problem here is that there isn’t a template for Test like there is for the other types.

Back to the Command Prompt

After opening the app or downloading it, open the folder containing the project in the command prompt.

Create a new folder called tests and change to inside of the directory.

You will see the following output :

The following files were just created :

If you look inside the Tests.cs, then you may notice that it contains one simple test that always returns true. So therefore the test will always pass.

That’s great, how do we run it?

We first need to run dotnet restore to restore the packages.

After that is complete, run dotnet test command to run the tests. You will see the following output after it has compiled successfully :

Notice that one test passed and zero failed. This is great and all, but I prefer to use Visual Studio for my tests.

Back to Visual Studio

Go into Solution Explorer and Add an Existing Project to your solution. I usually create a virtual folder called test for my test code. You can do that if you wish. 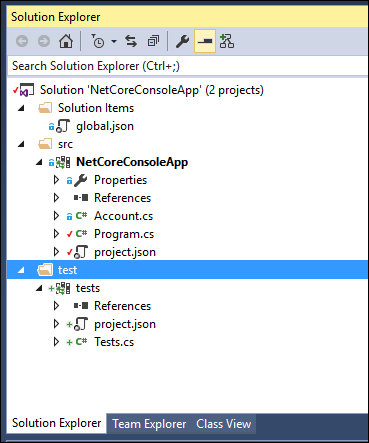 Take the options Test-> Window-> Test Explorer from the Visual Studio menu and you will see the one test that we have is ready to run. Go ahead and select Run All and you should see the following : 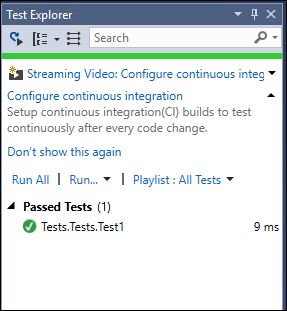 Great! Now you can quickly change the Assert.True(true); line to Assert.True(false); to make the test fail and check that functionality.

If you stop right here and take a look at your build output then you will see the following :

Notice that the test is targeting .NET Core 1.0, just like when we ran this from the command prompt.

You can now right click on references and add a reference to the local package as shown below :

Go back to your Tests.cs and write your first test!