A couple of weeks ago, I used an online tool to create an ICS file for an upcoming Azure Functions Webinar. After I tweeted it, I saw this recommendation from a friend of mine named Carl Schweitzer (@carlschweitzer) :

You need to have an Azure Function serve up your ICS file. That would be awesome!

Setting it all up!

Since I used an online tool to create the ICS file, I knew that I was going to have to generate an ICS file from my site and that it would be used all over the world. It would also need to work with a variety of email clients, including online ones. I also wanted folks to just go to a website and it would generate and send down the ICS file. This would also allow me to easily modify it for future webinars.

With that in mind, I began by taking a look at a third party library called iCal.NET. It looks like this handles all the various time zones and client. Next, I opened the Azure Portal and creating a new Azure Function application securing the name that folks would go to : 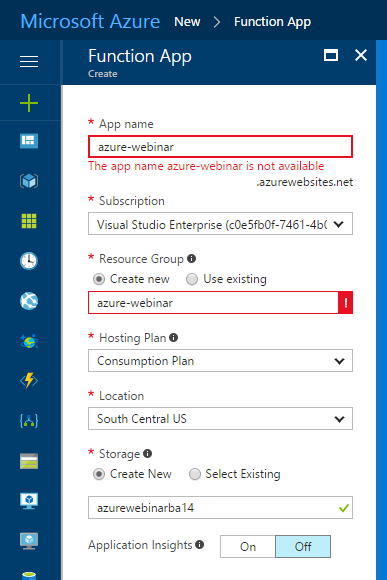 Next, I chose a language and happily picked C# (Amazon AWS Lambdas only supports C# via .NET Core) and used a HttpTrigger template. How cool is it to have templates like this?!?

By default, the code in the template is looking for a name parameter and a POST command. Since, I didn’t want to respond to a POST, but rather just a GET, I used this as my start but deleted the name parameter section.

Armed with just the online editor, I started writing code. I could have downloaded Visual Studio 2017 Preview 3 and the Azure Function tooling for a richer debugging experience, but it was getting late and I wanted to crank this out with just a browser and my C# skills.

I needed to pull in a third party library, so I noticed that you could view “Files” inside the portal and that it supports NuGet. I simply created a project.json and added the following NuGet package reference to iCal.NET and Newtonsoft.Json :

When I switched back to my function, I noticed my project started pulling down the references and restarted my function.

I finally landed on the following code after reading the iCal.NET docs and learning more about HttpRequestMessage :

The code is pretty self-explanatory if you’ve used iCal.NET before, but basically I create the file and ensure when someone visits the site that it sends down an ICS file named webinarinvite.ics.

Very cool! Now to test the function, it was as simple as selecting GET from the dropbox on the Test Tab and hitting the Run button. 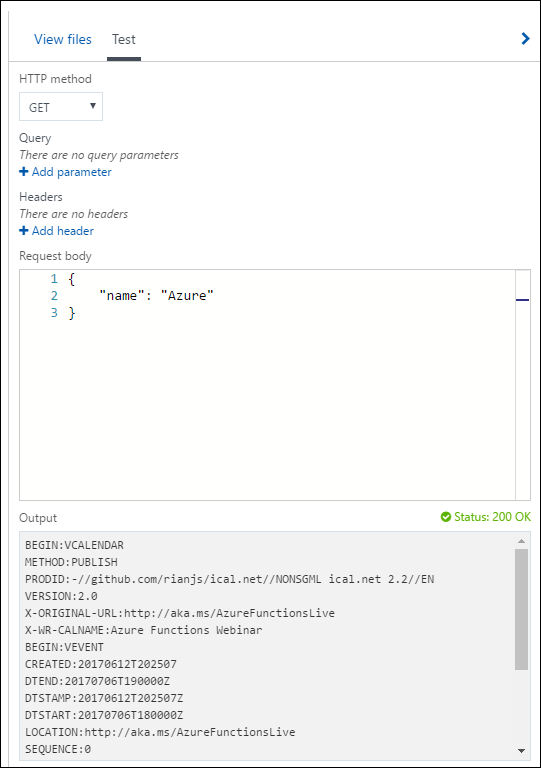 Now that my function was working properly, I grabbed the URL to my app and pasted it into the browser. The URL was easy to find as shown below: 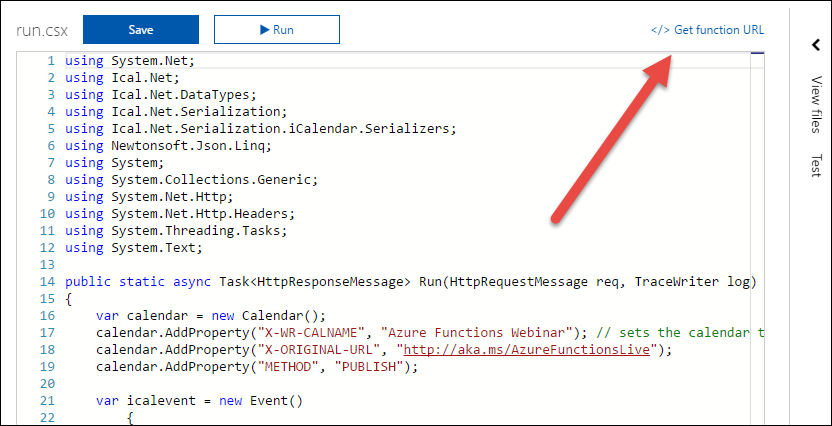 Success! It downloaded the .ICS file and after opening it, the following entry appeared in my calendar : 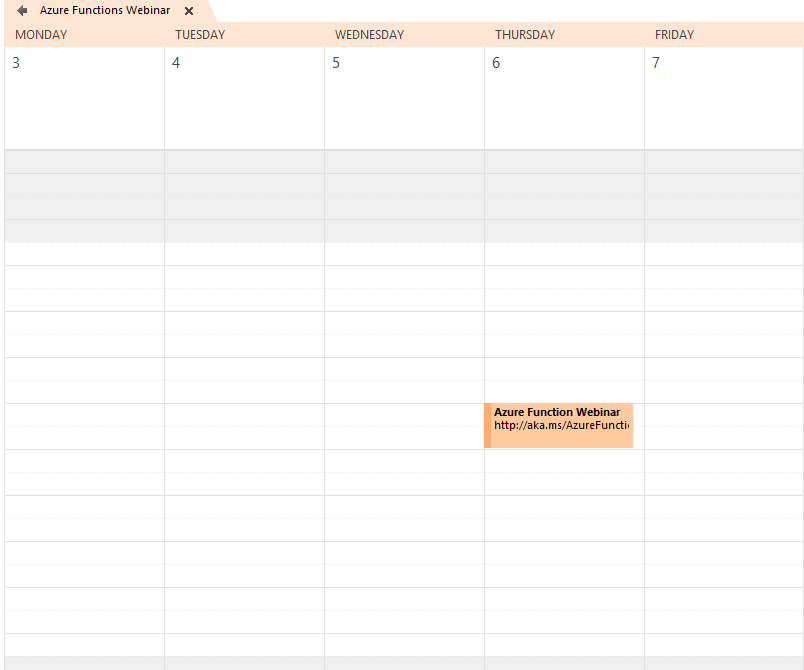 I’ve recently checked the traffic using the “Monitor” section and noticed it has already received 393 downloads!

Whenever I need to update this in the future, all it will require is changing two lines. No additional servers, redeployment, etc. is needed as it will auto compile.

Not only did it solve our business needs, but I think have the webinar available for later viewing even saved a marriage!

I am committed to making sure no marriage is at risk by attending our webinar. 😀

This really shows the power of Azure Functions and I’m very excited about Serverless! As always, thanks for reading and smash one of those share buttons to give this post some love if you found it helpful. Also, feel free to leave a comment below or follow me on twitter for daily links and tips.