How hard do you think it is to:

In this mini-series, we’ll build on each part starting with creating and publishing a .NET Core WebAPI project. Today, we’ll use Docker Compose to create an image and push it to Docker Cloud and we’ll wrap up by deploying it to Azure using Web App for Containers.

Now that we have created and published a .NET Core WebAPI project, we’ll resume by using Docker Compose to create an image.

Think of this as three steps:

Let’s begin by creating a Dockerfile.

What is a DockerFile? It is simply a text file containing the instructions needed to create a new container image. These instructions include identification of an existing image to be used as a base, commands to be run during the image creation process, and a command that will run when new instances of the container image are deployed. In other words, this file defines your app’s environment so it can be reproduced anywhere.

Copy and paste the following and name it Dockerfile without an extension and place it in the same folder as your source code.

Let’s go over the main instructions:

We need a docker-compose.yml file to pass to the Docker Compose Command

What is docker-compose.yml? This file defines the services that make up your app so they can be run together in an isolated environment.

Let’s go over the main instructions:

When composing this Docker image, we will use the mbcwebapi project and build an image called mbcrump/mbcwebapi. We’ll set the context to look in the ./mbcwebapi folder and there it will find the Dockerfile.

Note: Please note that the image name mbcrump/mbcwebapi was based my Docker username and then the app name. If you don’t have a Docker account, then you probably want to create one now.

We need to simply run docker-compose up and Docker Compose will start and run your entire app.

Excellent! We now have a ASP.NET WebAPI project living inside a Docker Container that we can push to Docker Hub.

Login to Docker Cloud and create a repository. In my case, I used mbcrump/mbcwebapi just like in the docker-compose.yml example earlier. 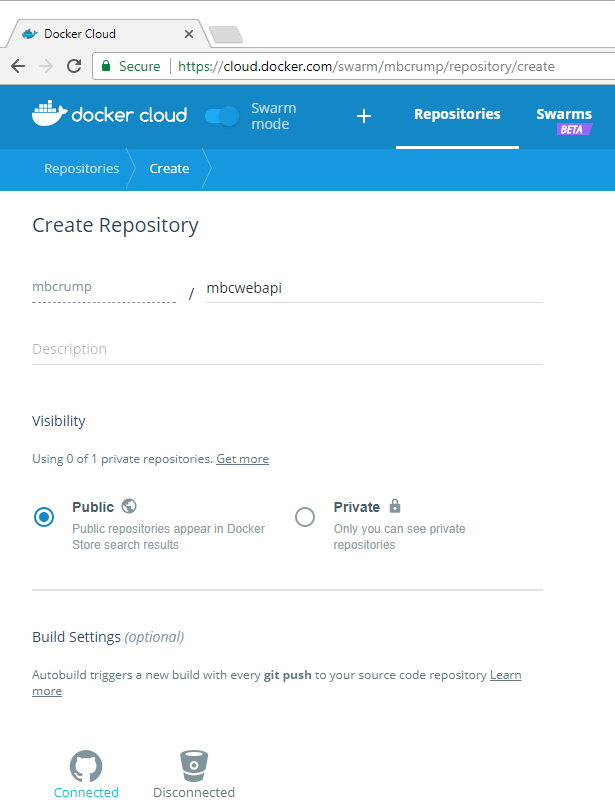 Head back to the terminal or command prompt and enter:

docker push mbcrump/mbcwebapi:latest to push your image to Docker Cloud.

You can go back to Docker Cloud to verify it pushed successfully. 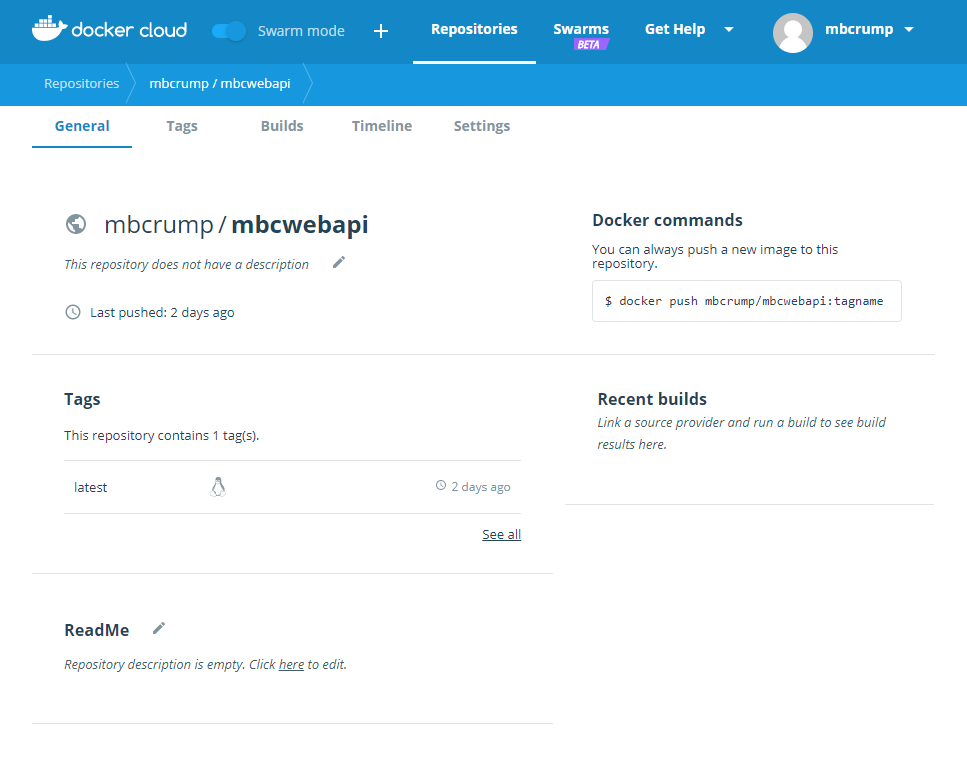 Nice! The only thing left to do now is push it to Azure using Web App for Containers which we’ll do tomorrow.